I may spend a lot of my time working on robots, but I like people. I’ve noticed this in my professional life: I’m happier and more productive working on a small team, rather than solo.

My day job has me working alone a lot of the time, so at the beginning of March, I decided to take matters into my own hands and “find the others.” I knew about Noisebridge in San Francisco, but they didn’t quite seem like my people — when I joined their IRC channel they suggested I jump in front of a train, in fact.

So I was delighted to discover a hackerspace right down the street from me: Ace Monster Toys in Oakland.

So far, I’ve been really pleased with the folks at AMT. They’ve been everything I was hoping to find in a hackerspace: friendly, geeky, courteous, and happy to collaborate. And look at all the MakerBots! (I’m on the right, holding Eris.) 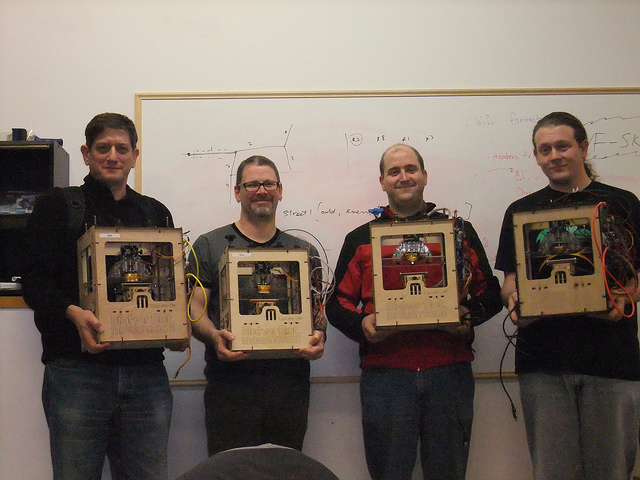 My first week at AMT was also when I discovered that MakerBot Industries has decided to stop supporting the Gen3 electronics — the boards that control every bot in that picture, as well as at least 2400 others. I was hurt by this, though I don’t disagree with their decision — selling new machines pays the rent, while pampering early-adopters only generates nebulous “good will.”

So, in the spirit of hackerspaces, I’m addressing the problem in a social manner. There are 2400 machines in the wild with perfectly good electronics, which have nonetheless been declared too old to work with future upgrades. I’m building a set of adapter boards that make the Cupcakes far more capable than the “Gen4” electronics that MakerBot Industries suggests as an upgrade path. Of course, I do have a day job, so progress may be intermittent — but stay tuned….